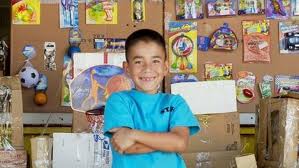 If you have an Internet connection you’ve most likely heard about an ingenious nine year-old boy named Caine, now famous for building an elaborate arcade entirely from cardboard.  A short video of his endeavor appeared in my Facebook feed from an acquaintance claiming it was one of the most heartwarming she’d ever seen. I opened it with curiosity and five minutes in, I had tears in my eyes.

The story of Caine Monroy is one of creativity, tenacity, and optimism. Fueled by his love for building games, he remained undeterred that no one had ever stopped to play. His optimism kept him focused on the future he imagined for the arcade.

There is so much that we as adults can learn from Caine. I believe this is why so many people have responded to his story. Life will always present obstacles, and surely we know that hard work doesn’t guarantee a certain outcome. But what makes all the difference is our belief, our hope, and our perseverance in the face of those challenges.

Thanks to the power of social media and the grace of the filmmaker responsible for the video, it’s possible to donate to a college fund established for Caine. As of this writing, over $150,000 has been donated by strangers like you and me, from around the world. The goal was $100,000.

So next time you’re having a bad day, remember Caine - dream big, work hard, and never give up. Because...dreams do come true. A little lesson to be learned from a nine year-old.