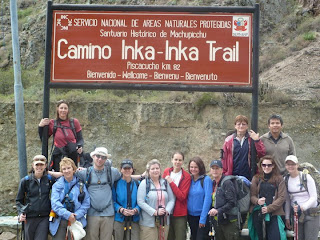 In 2005 something happened to me that will leave me forever grateful and inspired by what's possible. I was out with a friend and we were both struck by how fortunate we were to have our health despite both of our mothers living with MS. It was that day I created an intention to do more...

I determined that day I wanted to make a difference for people living with MS. I didn't know how or what I'd do, but it didn't matter...it would happen as long as I was mindful of it and was open to solutions.

Over a year later I reconnected with my friend and told him about my idea. I wanted to create an experience for people to live big lives, do things they thought they might never do, test themselves, celebrate their health, see the world and…make a difference for people living with MS. We called the idea MS Climb. It was just an idea with a name and a website (www.msclimb.ca) at that time. It was intimidating committing to something when I didn't really know what I was doing. But for some reason it didn't seem to matter…I was committed. I had a clear intention.

Over the course of that first year, we developed a program to take 20 MS fundraisers to Peru with the ambition to hike a four-day section of the Inca Trail. I didn't know 20 MS fundraisers nor how to get them to Peru or even where exactly the Inca Trail was or how to climb it. I kept focused on my intention - then slowly people began to show up. By October, we had 23 fundraisers registered and had raised over $150,000 for MS. We had created an amazing community of incredible people who also wanted to make a difference. That was five years ago. To date we have raised over $900,000 with the intention to raise $1,000,000 by October 2012.

The biggest hurdle I’ve had with MS Climb was telling people that first year (before we had a plan) about my intention. What I learned is that when you create an intention, choose to live into it to make it real. The biggest obstacle to achieving it is you!
---
Ralph Cochrane is the founder of MS Climb, a life coach, world traveller and an accomplished IronMan. Please visit www.msclimb.ca to learn more about how you can support those living with MS.