The Currency of Happiness 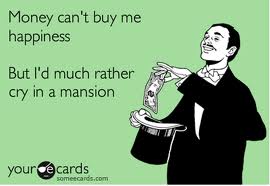 A few years ago, when I was in Costa Rica, I met a young guy from Toronto who had won $17 million. I was struck by how lost he was, mistrusting of others and unsure as to what he was going to do with his life. As he ordered another drink, I remember him saying he wished he'd never won. How ironic I thought...

People automatically claim (but half-heartedly believe) that "money can't buy happiness". Why then do we simultaneously lament all the things we'd like but just can't afford? An interesting TED Talk recently came to my attention that argues that the WAY we spend our money (be it a lot or a little) is directly correlated to our happiness.


The speaker, Michael Norton, says that if we spend money on ourselves, our happiness remains unaffected. However, when we spend it on others, we are often happier as a result.

And it stands to reason.

It's not so much about money per se, but on the act of giving or doing something kind for someone else. There is a saying by Samuel Johnson that goes "getting money is not all a man's business: to cultivate kindness is a valuable part of the business of life".

So take a look at the video. Hopefully it inspires you to complain less about what you don't have, and share more of what you do.