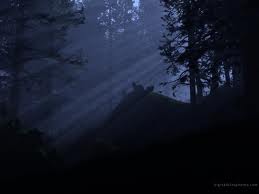 Last week there was a major power outage that affected more than 6,000 people in the Toronto downtown core. I was one of them.

My boyfriend suggested I “enjoy the silence”. Those words resonated instantly and I knew it would be the subject of a blog post. We often complain about our inability to slow life down but the darkness was permission, if not an invitation to do so.

I had just come from a bike ride, hadn’t yet showered and was in the middle of eating dinner when the background hum that usually fills the loft went silent. It was like turning off an entire city at the flick of a switch.

Since daylight hours are long at this time of year, I didn’t feel impacted by the outage immediately. Fortunately my place is cool enough without A/C that I felt comfortable regardless. But as time wore on, and the loft grew darker, I was faced with being deprived of something we take for granted and use every day.

Entering the bathroom I automatically tried to turn on the lights and was startled for a second when the room remained black. Showering in darkness was tricky, but had me thinking about those without electricity or running water as a regular course of living.

Without the ability to charge my phone or computer, I was reminded of how reliant we are on these devices as a means of communication. As I texted, I watched the battery drain steadily and felt oddly threatened by the prospect. Next would be the challenge to set a morning alarm on a phone with limited battery life.

So did I enjoy the silence? I accepted it reluctantly. But, it did give me the pause and inconvenience I may have needed to truly appreciate something on which we are wholly dependant and that many are forced live without.

And for that I am thankful.