Spotlight On: A Canadian Hero 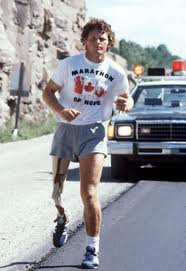 I don’t recall seeing him on television and I was only a child when he passed away.

People sometimes imagine whom they’d like to meet if they could go back in time, live in a different era, perhaps in a different place. My answer to this question would be Terry Fox.

For anyone who knows Terry's story, he represents hope, determination, and perseverance like few others. When I see videos of him on the road, I wonder what it would have been like to follow his progress…to have caught a glimpse of him…cheered him on.


So profound was Terry's accomplishment that it has endured with great success since his passing. Terry Fox and those who have sustained his legacy have made an enormous contribution to cancer fundraising.

These are some of the astounding stats around his endeavor:

Since his death, the Terry Fox Run is held annually in various communities across Canada. I spoke with some people who have participated to get their perspective from the inside.


Torontonian Paul Johnston was a fairly new runner, inspired by his wife to participate. The 10k distance was more than he had ever run at one time, so this was an opportunity to push his own personal limits.  To listen to Paul speak about the experience is to appreciate the essence of all that Terry represents. “Until you've gotten older, and you’ve lost loved ones to cancer, seen its effect on friends and family, and you get a better sense of your own health and mortality, and just how hard it is to run a 10k race - there's no way you can appreciate what he did and the effort and drive it would have taken. Simply amazing selfless perseverance” Paul states.

An ardent Fox supporter, Kristine Aoki has completed the Terry Fox Run every year since high school (in her words, a long time!) and even organized a run herself. For her, Terry Fox symbolizes courage, determination and unwavering dedication to a cause.  “How many people would actually have the drive to run the equivalent of a marathon every day for 143 days, especially with one artificial leg?  Thirty-one years after his death, he remains such an inspiration to so many people around the world.  He was incredible.”

Note that there is no corporate sponsorship of the run. All funds raised are donations from people like you and me. So if this sounds like something you’d like to support, please take a moment to donate here. Let's help contribute to the legacy of a true hero.